At first glance, Japanese stiltgrass appears to be an innocent, pleasant-looking plant. Most wouldn’t even give the grass a single thought if they were to encounter it. In a sad reality, however, that “irreproachable” grass is quite the opposite. This invasive species chokes out the wildlife around it, and grows and spreads at an alarming rate. It decreases biodiversity and forces animals and plants alike out of their natural habitats. It is widely thought that this species is among one of the most dangerous invasives, as it has spread throughout the country very quickly in relatively little time.

The grass was introduced in Tennessee in the early 1900s through its use as a packing material. It is native to Japan, China, central Asia, and India. Since then, it has spread rapidly to the east, and has started to make its way into the Midwest.

Like other invasive plant species, Japanese stiltgrass is spread with the unintentional aid of humans and animals. The small seeds latch onto fur and clothing, or are carried by the wind. The seeds can survive for up to five years in the soil. The stiltgrass can cross and self fertilize, producing up to 1,000 seeds per individual plant. Most animals avoid eating the plant, leaving it to grow with little to no controlling factors.

The stiltgrass is most often found in shaded areas that are often subject to soil disturbances such as tilling or flooding. It is found along roadways, in floodplains, along hiking paths, as well as in damp woodlands. It’s not picky when it comes to the acidity of the soil it inhabits, though it prefers the soil to be fertile. When in direct sunlight, it doesn’t grow as quickly as it normally could. Its growth is also slowed when near stagnant bodies of water. The grass can also infiltrate residential areas, and is often found in flower beds, lawns, and parks.

Grass identification is notoriously tricky, but thankfully, Japanese stiltgrass has a variety of distinct features for people to identify it by. First off, each plant can have multiple weak stems that branch near the base of the plant. The stems are smooth, and can be green, brown, or purple. The leaves are two to four inches long, and about half an inch in length. They’re pointed on both ends, and have off-centered, silver, ridges. They are widely spread out on the stem. The roots are thin, and weak. They are very easy to pull out of the ground because they do not grow very deep into the soil. Aerial rootlets are present along nodes near the base of the stem – these stilt-like features are what gives the plant its common name of “stiltgrass”. The plants grow flowers in late summer through early fall, and the flowers have a few spikes. 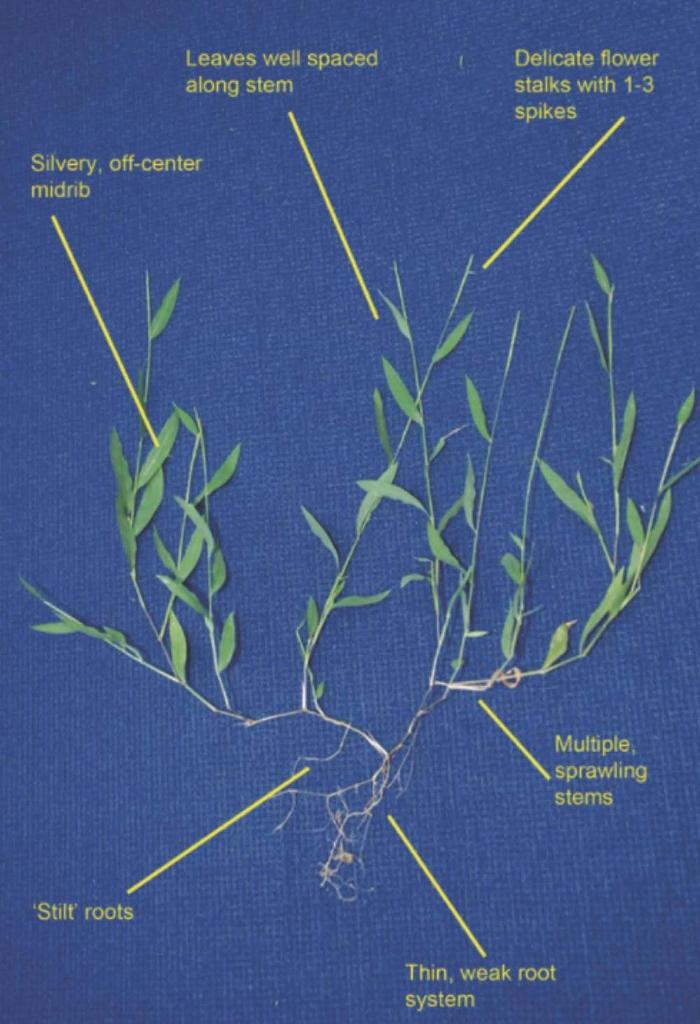 Japanese stiltgrass can get up to about six feet tall, though many plants tend to be between one to three feet in height. The taller plants usually prop themselves up on other plants or trees, or they lay flat against the ground. During the autumn, the tops of the plants turn purple or brown, and in the winter the thatch turns an orange color.

While keeping Japanese stiltgrass under control and preventing it from spreading further may seem like a daunting task, it is undoubtedly a necessary one for the well-being of many ecosystems. Within recent years this invasive has spread to northern Indiana, and last year it was found for the first time in Michigan, in Washtenaw County. Be sure not to get it confused with common look alikes such as Whitegrass, Nimblewill, Basketgrass, Deer tongue, Smartweed, or Crabgrass!