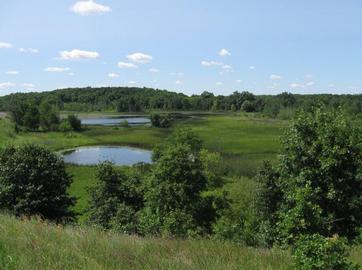 The Michigan Nature Association (MNA) was named one of the first recipients of Consumers Energy Foundation's inaugural Planet Awards, which were announced by the Foundation on Earth Day, April 22, 2019.

"We are thrilled and honored to receive one of the first Planet Awards," said Garret Johnson, MNA's Executive Director. "Consumers Energy has been a very important partner in the fight to save endangered species in Michigan and this grant will help us save critical habitat that might otherwise be lost."

MNA was selected to receive a Planet Award of $250,000. Conservation Resource Alliance and the Michigan United Conservation Clubs also received awards of $150,000 and $100,000, respectively.

MNA will use the award to protect, restore, and enhance 575 acres of critical habitat at or adjacent to eleven of its more than 175 nature sanctuaries. The lands targeted in MNA's project are some of the last strongholds for rare, threatened, and endangered plants and animals in Michigan, according to Johnson. The work will be conducted in eight counties within Consumers Energy's service area over a three-year period.

"Many of the plants and animals that will benefit from our project have existed in Michigan for thousands of years but are facing uncertain future due to invasive species, climate change, and habitat destruction. The funding provided by the Planet Award allows us to act now to try and prevent them from disappearing from our landscapes forever," Johnson added.

Learn more about this, and the other Planet Awards by visiting http://www.csrwire.com/press_releases/41905-Consumers-Energy-Foundation-Provides-500-000-to-Three-Projects-Protecting-Michigan-s-Natural-Resources-with-Planet-Awards