In the state of Michigan we are lucky to be the home of multiple turtle species, from the common snapping turtle to the red-eared slider. With such a diverse potential for habitat, turtles can live in woodlands, grasslands, lakes, rivers, wetlands, and even cities. Unfortunately, some turtles with more specific needs are suffering from habitat destruction and loss, making their survival a bit more difficult. Three of these critters are species of concern, which dictates that they are in need of specific conservation actions, and one species is currently threatened, which is a warning that it is on the brink of becoming endangered. An important way to help conserve these turtles is education, so let’s take a minute to learn how to identify these turtles and their habitat.

The first of the four is the eastern box turtle, one of the three species of special concern. Recognized by a helmet-shaped shell with yellow and orange blotches, the eastern box turtle prefers moist, deciduous woodlands with sandy soils and ravines or slopes. Historically, they have been common in eastern Lake Michigan and western Lake Erie woodlands but numbers are steadily decreasing. 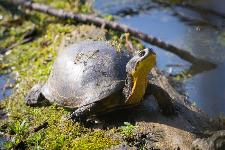 Blanding’s turtle, on the other hand, prefers more wetland habitat, a habitat itself that is in need of conservation effort. These turtles can be found in shallow weedy waters of wetlands, marshes, and swamps. Their shell is tall, domed, and of darker coloration. The rest of the skin is also darker, and the under part of its body and neck is a bright yellow color.

The Wood turtle prefers low disturbance, and because of that the species is now quite uncommon in the Great Lakes region. For most of the year, they reside in sandy bottom streams or rivers, but are terrestrial in the summer. Shells of wood turtles are brown or grayish brown, that sits low and central on their back. Their head, legs and tail are typically black while the softer parts of their body are a yellow color.

While the previous three turtles were species of special concern, the Spotted turtle is the one threatened turtle in Michigan. These turtles live in clear shallow water with mucky bottoms and much vegetation. Their populations are typically isolated and are found surrounded by areas of unsuitable habitat, and are unfortunately quite rare in the Great Lakes region. These turtles, like their name, are distinguished by small bright yellow spots on their dark colored shell. 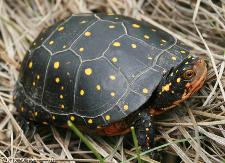 Many of the turtles mentioned above are threatened by wetland drainage and other types of disturbance such as pollution, nest predation, and over-harvest. One of the best ways you can help protect these species is by helping joining a conservation organization, such as the Michigan Nature Association, that supports efforts to protect their depleting habitat. Learn more about protecting and identifying your local turtles by visiting www.herpman.com.