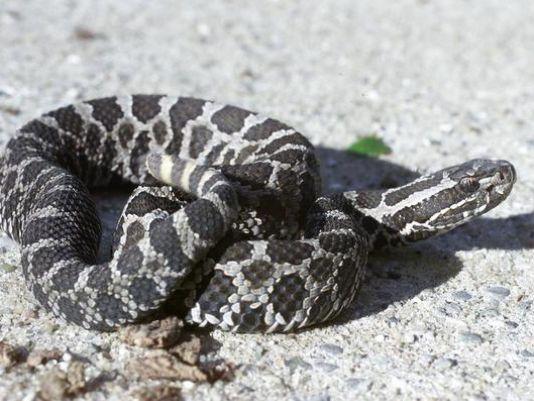 Inspiring both our fear and fascination, snakes have long been subjects of lore and objects of persecution, and more recently, household adornments for reptile enthusiasts. Less appreciated about these legless creatures is the ecological role they play as middle-order predators. They serve as a food source for other wildlife, but they also help to control small mammal populations - chiefly that of rodents. As such they act as indicator species, which from an ecological standpoint means their conservation also entails the conservation of entire natural systems which support an array of plants and animals.

The Eastern Massasauga Rattlesnake, sometimes called the Michigan Rattlesnake, Prairie Rattlesnake, or Swamp Rattlesnake, is one of several Michigan-native snakes, but is Michigan's only venomous snake. Still, it poses little to no threat to humans. This timid species is extremely reclusive and avoids humans as best it can, preferring to remain camouflaged or leave the area when disturbed. Despite a somewhat fearsome reputation, rattlesnakes strike in defense only as a last resort.

Grown adults are of modest proportions, reaching only 2-3 feet in length. They are characterized by a light grey or tan base color with rows of large, dark brown circles and the hallmark triangular or heart-shaped head. The young are paler, but no less brightly-patterned. It ranges throughout the entire lower peninsula in swamps and wet lowlands. Occasionally it can also be found sunning in drier uplands.

Like many others of its kind, this once-common species has been driven to decline largely due to the loss of wetland habitats from urban and agricultural development, needless persecution and snake fungal disease, and is now classified as threatened or endangered in every state across its American range spanning from Pennsylvania to Missouri and Minnesota. MNA is a key stakeholder in the conservation of the Eastern Massasauga and currently protects several Eastern Massasuaga habitats in Oakland, Berrien, Van Buren and Mackinac counties.

Education and awareness can play an important role in the future of this species. If trekking through areas of possible rattlesnake habitation, be sure to wear thick shoes and pants or socks that reach past your ankles. Though sightings are rare, if you see a snake which you suspect to be a rattler, keep a respectful distance and restrain pets to prevent them from agitating the snake. Much has yet to be learned about these reclusive creatures, but perhaps with a trained eye, visitors to MNA sanctuaries can observe them in their natural element.

MNA also educates the public about the species at the Annual Rattlesnake Family Fun Run & 5K in Rochester. This year the race will take place on Sunday, September 17 along the Paint Creek Trail. The 5K will promote efforts to preserve habitat for the Eastern Massasauga rattlesnake.